As the Hoboken/Jersey City area grows and expands, Hudson County is rapidly turning into a tourist attraction in itself. If you’re lucky enough to be around it on a regular basis, then you know it’s time to get exploring.

To help you out, we’ve compiled the ultimate Hudson County Bucket List — aka the coolest things to do, places to see, and historical spots to visit in Hoboken, Jersey City, Weehawken, and the rest (with some foodie picks mixed in). They don’t call it the “Gold Coast” just for kicks, that’s for sure.

Here’s your (ever-growing) list of things to do in Hudson County: 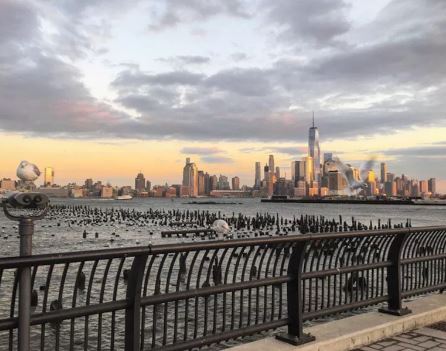 Have a picnic in Liberty State Park. 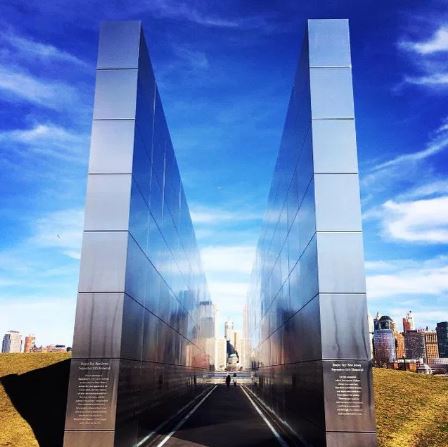 Enjoy Miami Vices on the water in at Surf City. Their lobster rolls are also pretty legit.

Have a game night at Barcade.

Do a ‘speakeasy’ tour of Jersey City — hitting up all of the local ‘underground’ spots (including PS Wine Bar, Dullboy Bar, The Archer, and Miss Wongs to name a few).

Eat and drink to your heart’s content at the Midnight Market (which happens monthly) at Harborside Financial Center.

Visit the Zeppelin Hall Biergarten and Restaurant — a European-style space and imbibe all the beer your heart (and liver) could ever desire.

Stroll along Newark Avenue and pop into various eateries and bars. It’s a pedestrian walkway that has had quite the transformation in the last few years.

Have dinner on the waterfront at Battello in Jersey City — the views and ambiance are unparalleled.

Channel your wild side by racing go carts at Pole Position Raceway.

Head to the Landmark Loew’s Jersey City Theater and take in the majestic theater in all its historical glory. If you’re lucky, snag a ticket to the yearly film festival or try your hand at attending a monthly screenings of classic movies. They also recently hosted a TedX there. 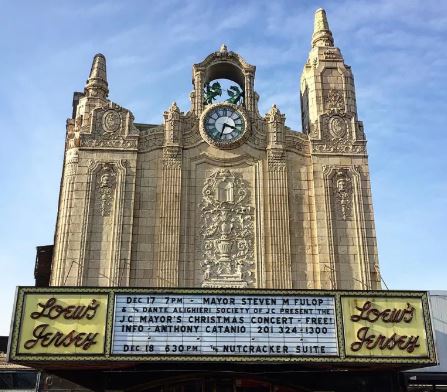 Nerd out at the Liberty Science Center — and bring out your inner 4th grader (if you grew up in NJ, you know what that means).

Walk along the Hudson River Walkway, the path that connects Hoboken and Jersey City (and pass by the Urban Beach while you’re at it!)

Chow down on a late-night burger at White Mana, the 1939 World’s Fair building which is a historical landmark. White Star bar is another burger must.

Spend a summer evening at Groove on Grove and listen to some live music while enjoying some cocktails. On Wednesdays in the summer, they take it outdoors.

Visit the Hudson and Manhattan Railroad Powerhouse, also known as the JC Powerhouse (which assisted the subway system between NJ and NYC) — cited by Preservation New Jersey as one of the state’s ten most endangered historic sites.

Eat an authentic Italian dinner at Laico’s Restaurant — way off the beaten path (it almost looks like a house). You won’t be disappointed.Grab the most delicious custard cups from Neptune Bakery on JFK Boulevard — open 24 hours to boot.

Try your hand at paddleboarding at the Liberty Landing Marina. 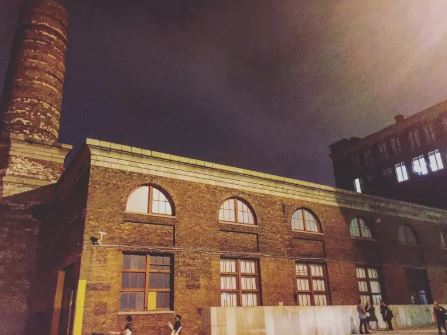 Spend a night at the Mana Contemporary Art Museum at 888 Newark Avenue. 5 floors of art exhibitions is sure to keep you occupied for a few hours, minimum.

Tour the Historic CRRNJ Terminal, which underwent a lot of turmoil after Hurricane Sandy, but still is quite the sight to see (and is now open after extensive renovations). Beautiful Manhattan skyline views in the evenings!

Bowl a strike (soon!) at the Barrow Mansion, one of the only examples of 19th century bowling left in the country — which is being historically restored for public use.

Get the roast beef special on Thursdays or Saturdays at the world-famous Fiore’s Italian Deli.

Go cannoli tasting at all the local joints — including Carlo’s, Giorgio’s, Luca Brasi’s (and even Otto Strada does an excellent cannoli cone). Yum.

Taste the area’s best mutz at the Annual Hoboken Mutz Fest which happens in late January.

Ride the NY Waterway Ferry to NYC and back and be a total (photo-loving) tourist for the morning or afternoon. 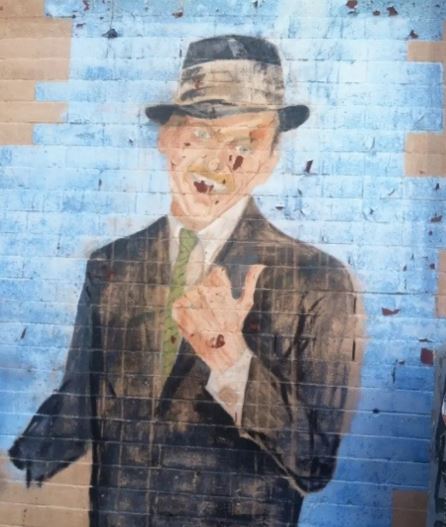 Grab a hard-to-score reservation at Augustino’s and wine and dine yourself in this cozy uptown spot.

Go kayaking (for free!) on the Hudson River with the Hoboken Cove Boathouse in the summer.

Eat a 48-oz. rib eye and listen to live piano at Dino and Harry’s on a Friday night.

Visit the food trucks at Pier 13 and have an evening of sweet sangria and views on the waterfront.

Peek inside the OLG (Our Lady of Grace) church, a Gothic-style church at 4th and Willow. While you’re at it, check out all of the other historical church sites in the mile square.

Watch your favorite flicks at “Movies Under the Stars” at Pier A every Wednesday each summer. 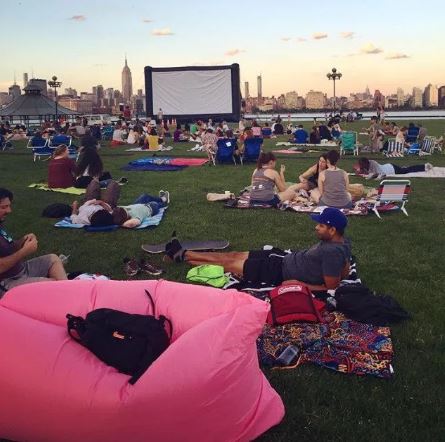 Head to Elysian Park, the spot where the first baseball game was ever played in America.

Stroll down Washington Street and shop and eat to your heart’s content.

Go to the Brennan Fire Museum, located inside the former 47th Street Firehouse, which is part of the National Register of Historic Places — with artifacts sharing the history of firefighting in Hudson County. 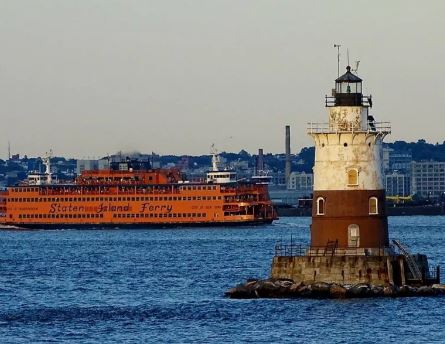 Snap a pic of the Bayonne Bridge, connecting Bayonne with Staten Island, and is one of the longest arched steel bridges in the world.

Walk near the Robbins Reef Light Station, built in 1839 — a lighthouse that can only seen from far away (as it’s not open to the public).

Dine at a variety of top-notch off-the-beaten-path haunts, including Casa Lupita and Paesano’s Pizza.

Head to Harbor View Park in Bayonne and see the “Tear of Grief” monument. The park also offers direct views of the Manhattan Skyline and the Statue of Liberty.

Attend a soccer game at the Red Bull Arena in Harrison, home of the New York Red Bulls of Major League Soccer. 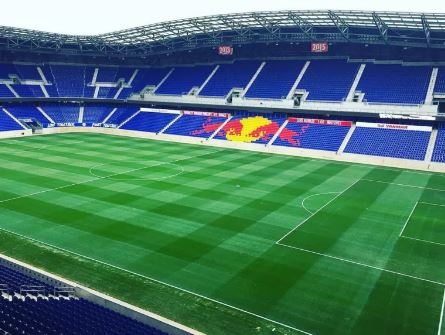 Eat at Tops Diner, a legend in East Newark — known its long wait and absolutely delectable diner food. Tip: Opt for the Stuffed French Toast; you won’t regret it.

Enzo’s Deli is another must-stop sandwich shop, and Vinnie’s neighborhood bar has some Portuguese-meets-American dishes that you’ll probably write home about.

Trek to Snake Hill, an igneous rock intrusion jutting up from the floor of the Meadowlands at a bend in the Hackensack River.

Enjoy an evening on the water dining at Waterside Restaurant, complete with world-class NYC views.

Visit the Union City Historical Museum and view the extensive collection of photos, library memorabilia, and building architecture from the past 100 years.

Walk along Boulevard East in Weehawken and say hello to killer views of NYC, day or night. 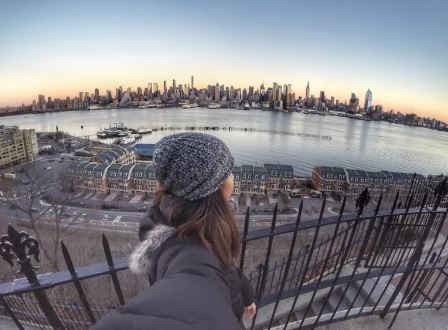 Visit the Dueling Grounds — the spot where Alexander Hamilton was killed in his infamous duel with Aaron Burr.

Order seafood at the Chart House (and make sure your reservations are by the window on the water).

Take a peek at NYC from Hamilton Park at night. You’ll be blown away.

If you have any real estate questions, please don’t hesitate to reach out to us. We would be happy to help you.Remember, we are a full service operation from start to finish with wonderful teams in place to assist in all arenas from buying, selling or investing; residential and/or commercial.

Want to Advertise on this Site?

In just a few seconds, you will be searching just like a Realtor®

About Properties by Southern

Professional New Jersey Realtor Associate Patrick C. Southern, is a seasoned veteran boasting 20+ solid years of experience (and has been a top producing agent for the past 10 years consecutively). Presently, Patrick is procuring sales in a wide range of areas across North Jersey and is the #1 producing realtor in Hudson County with over 2000 homes sold throughout his career to date. Impressively, in today's rapidly changing real estate market Patrick's business has actually increased by 20% every year for the past 4 years.

Patrick's success in closing transactions can be attributed to a multitude of significant factors including his exceptional work ethic, his continuous effort to educate himself in his field daily, his highly qualified team (including buyer's agent & transaction manager) and his extraordinary database of resources in his fie ld, related to his field and beyond.

Being a lifelong NJ resident, experienced realtor, property owner and investor himself, Patrick has a deep rooted understanding of the NJ market; but most importantly, Patrick always has his clients’ best interest in mind and by setting realistic goals Patrick is able to not just list your home but ultimately sell your home. Patrick is best known for his proactive approach to sales and his undeniable ability to get the job done.

Friends and Clients,Quarter Four brought an eventful year to a close.

Make Money In The Upcoming Market For The Familys Future

Opportunity is on the way!Student debt is higher than ever before. I s

When markets nationally start to shift (for better or for worse), it i

"Patrick Southern listed and sold my Hoboken condo and I could not have been happier. We talked a number of times over three years as I rented out the property as an investment. As soon as I was ready to pull the trigger and list, Patrick was there to work with me every step of the way from determining the list price, to discussing a sale strategy, to completion of the sale. I received multiple offers and was very pleased with the offer and price I ultimately accepted. I live in San Francisco and so it was of the utmost importance that I have an agent who I could trust to run the show from 3000 miles away. Patrick and his stellar staff did just that--taking care of necessary details, getting documents as necessary to me on the West Coast, communicating with me in a timely manner despite the time difference, and generally making the process smooth for me even though I was far away. I am an agent myself in San Francisco and so I know how great Patrick is. Highest marks for knowledge of the market, professionalism, and responsiveness."

This is a list of your favorite properties. We will email you if a property is reduced or leaves the market.

This message will go directly to the head of our team.